We will talk here about COPD and its relation to other respiratory illnesses, such as bronchitis and emphysema. Also, its symptoms based on different COPD stages and how natural therapies like salt therapy can help.

Chronic Obstructive Pulmonary Disease is a lung condition that escalates in stages among those with emphysema and/or chronic bronchitis.

Tragically, emphysema slowly destroys the air sacs in your lungs, which ultimately interferes with your outward air flow capacity. Bronchitis on the other hand, causes inflammation and narrowing of the bronchial tubes. The narrowing allows mucus to build up causing congestion.

When COPD is diagnosed in addition to a pre-existent condition such as emphysema or bronchitis, breathing can become almost impossible. Symptoms may be mild at first, beginning with a cough, some congestion and wheezing.  Regular medical checkups are absolutely necessary as you can easily dismiss these symptoms for a simple cold. 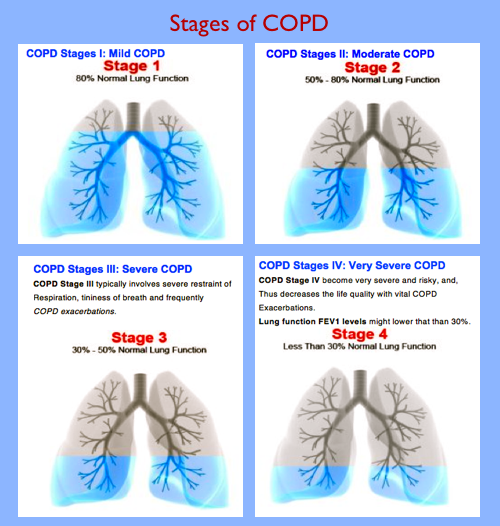 
Smoking is the number one cause of Chronic Obstructive Pulmonary Disease. COPD is most commonly diagnosed in patients over the age of 40. You can also develop COPD if you’re exposed to toxic fumes from chemicals or asbestos in the workplace. Long-term exposure to air pollution and inhaling dust has also been known to cause COPD among those with allergies.

Although COPD is considered to be a chronic condition, it can be managed and treated in a number of different ways to improve your quality of life. The most common forms of treatment are doctor prescribed bronchodilators to help relax muscles in the airways; gluco-corticosteroids are also prescribed to reduce the inflammation, and at later stages oxygen therapy is common. Surgery is usually the last form of treatment available and is often needed to remove large air sacs from the lungs, or in extreme cases a full lung transplant.

To lower the risk of contracting additional respiratory infections, your doctor will likely add vaccinations to your treatment plan. A yearly flu shot, pneumococcal vaccine, and possibly a tetanus booster helps protect the lungs from damage against infections.


Although there is no cure, currently, for COPD, alternative treatments do exist. These can help to increase lung air capacity and regulate breathing. Environmental treatments such as the Saltair home salt therapy device have been shown to be very effective. It helps in easing COPD symptoms and slowing the progression of COPD stages.

Saltair works by releasing microscopic particles of salt into the air over a 7-8 hour period. As the salt is inhaled, the inflammation in the bronchial tubes eases, allowing for clear breathing. These breathable salt particles help clear the mucus and reduce inflammation. They also naturally boost your respiratory immune system over time. Home salt therapy can act not only to treat the common symptoms of COPD, but can also act as a preventative agent in your environment by naturally cleansing the air. The negative ions of salt neutralize positively charged particles of dust, pollen and pollutants in the air.