Find what is bronchiectasis, types of disease, anatomical changes and prevention and treatment.

Bronchiectasis is a form of chronic obstructive pulmonary disease (COPD) in which the bronchi become widened and damaged. The bronchi are the large airways in the lung more specifically the 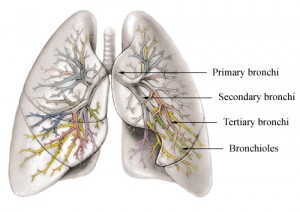 two major branches from trachea that lead to the lungs.

Inflammation of the bronchial tubes due to infection or allergy destroys the smooth muscles; the bronchial tubes lose their elasticity and prevents secretions to be cleared. Due to inflammation and smooth muscles damage anatomical changes occur as a result, and cause the airways walls to be irregularly shaped. Secretions are then trapped in the airways causing bacterial growth. This increases the risk of infection to spread into the lungs airways causing pneumonia.

Congenital bronchiectasis may occur due to genetic defect such as in cystic fibrosis, Kartagener syndrome, Alpha-1-antitrypsin deficiency or Young's syndrome. A defect in the airway cilia of the embryo can cause bronchiectasis.

Multiple and poor treated pediatric lung infections can lead to lung destruction and bronchiectasis later in life. Prevention is a very important factor, including proper treatment, avoidance of secondhand smoke and toxic fumes.

A good respiratory hygiene makes a difference in development of a healthy respiratory system. Home salt therapy and seashore exposure are
the 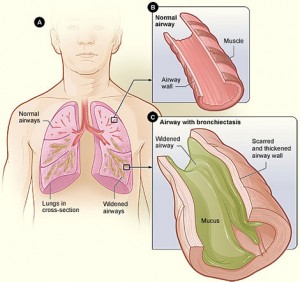 best avenues in maintaining good hygiene and preventing respiratory problems. The salt aerosol helps to fluidize the mucus and clear the airway passages. It also helps to reduce inflammation and kill bacteria in the airways, preventing and stopping infections.

Bronchiectasis is characterized by an increased production and accumulation of mucus, numerous infections and shortness of breath and fatigue due to poor lung functions. Wheezing may or may not be present. Sputum can sometimes be bloody due to damage of the bronchial walls or yellow, green with bacterial infection.

There are three primary types of bronchiectasis based on their anatomical appearance:

1. Cylindrical bronchiectasis – mildest form and is characterized by accumulation of mucus and chronic cough
2. Saccular bronchiectasis –  more severe than the first and is characterized by more damage and distortion of the airway walls and more mucus stagnant mucus and sputum.
3. Cystic bronchiectasis – is the most severe form but least common todays. It can appear in untreated lung infections, usually before the antibiotics were discovered, and where the person survives but with a permanent lung damage. There is productive chronic cough and lots of mucus production.

Treatment
Bronchiectasis is not a curable disease. The goal of treatment is to control secretions and to prevent infections through basic respiratory hygiene:
– stop smoking and avoid secondhand smoke
– drink plenty of liquids to make the secretions less sticky
– use natural muckolytics to fluidize the mucus and fight viral and bacterial infections – home salt therapy is the best to achieve this
– have good nutrition
– chest physical therapy also helps in getting the mucus out; mechanical devices such as chest clapper or vests may help, together with changing positions so that the gravity will help in loosening the mucus and be coughed up
– classical medical treatment involves antibiotics, steroids and bronchodilators
– if lung function decreases to the point that the patient does not get enough oxygen in the blood, oxygen supplementation is needed