COPD is very common today and holds many other respiratory illnesses under its umbrella. Find more about it, about symptoms and natural ways to help relieving associated symptoms and COPD treatment. 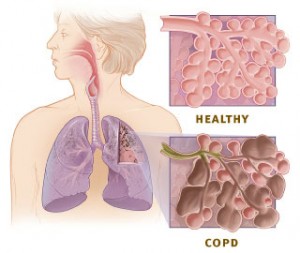 COPD is primarily caused by smoking, tobacco smoke, long term second hand smoking and air pollution.  These cause persistent inflammation response in the lungs and alter the pulmonary functions. A pulmonary function test will indicate abnormal functioning of the lungs and low airflow. Contrary to asthma, these limitations are not reversible and get worse in time.

Management includes quitting smoking first and pulmonary rehabilitation, inhaled bronchodilators, long-term oxygen therapy or even lung transplant. COPD is the third leading cause of death in USA and sixth worldwide, expected to increase due to increase smoking and air pollution.

Coughing is the first symptom to appear and if it lasts more than three months per year, for more than two years, the condition is defined as chronic bronchitis. Chronic bronchitis can appear before COPD is totally installed. Shortness of breath is usually the most bothering symptom and typically is of prolonged duration and worsen over time and with physical exercise. This cause anxiety, lack of oxygen and poor quality of life; low blood oxygenation has a high impact on the whole body and many other conditions co-exist with COPD. Some of these coexisting conditions include heart diseases, hypertension, diabetes, anxiety disorders and sleep problems. COPD includes chronic bronchitis and emphysema and many people with COPD have both.

There is no cure for COPD. Classical medical treatment for COPD is based on disease management by reducing the risk factors and stabilizing the disease. It stabilizes the disease by preventing and treating acute exacerbation, smoking cessation and oxygen supplementation. Pulmonary rehabilitation is a program of breathing exercises, disease management, and counselling. Medication involves bronchodilators to reduce the shortness of breath and corticosteroids to reduce inflammation and prevent acute exacerbation.

A natural treatment for COPD involves supplements, vitamins and home salt therapy. Long-term treatment with salt therapy for COPD can slow the evolution of the disease, beside helping with the respiratory symptoms.

Ginseng is a herb with long history in Chinese medicine and has shown some results in COPD and improving lung function. This herb should only be taken after consulting with a doctor because it interferes with some medication such as blood thinners, diuretics, stimulants, immune suppressant drugs and antidepressants.

It was found that many people with COPD do not have enough vitamin D. This can be because not enough sun exposure (not enough time outside) and also in elders vitamin D production is lower. Probably, poor blood oxygenation due to COPD also plays a role, beside poor diet and assimilation. Supplementation with vitamin D has been linked to better lung function test results and may improve symptoms.

Salt therapy or halotherapy #3 – that is exposure to aerosol salt therapy has shown significant positive results in COPD, based on the anti-inflammatory and mukolytic effects of salt.1  Long continuous exposure to salt therapy, every night for 7-8 hours, has been proved to be highly effective in improving breathing and reducing coughing.2 Salt therapy also strengthens the respiratory immunity, fights infections and clears secretions, promoting better breathing and well-being.