We have many things in the body that’s replaceable, or that we can even live without. While it takes time, hair grows back easily. Your skin regenerates itself every three to four weeks. If you have a problem with your appendix, a simple surgery removes it and you’ll feel good as new. You can even live with one kidney! However, one thing that’s extremely hard to live without are your lungs. Yes, it’s possible to live with one lung, but it’s an extremely challenging life. That’s why it’s important to take care of our lungs. Otherwise, some conditions or illnesses could arise that change your lifestyle forever. Lets talk more about Emphysema and salt therapy, a natural way to keep your lungs active and healthy!

Emphysema is a lung condition causing shortness of breath. Paired with chronic bronchitis, emphysema can form into another respiratory illness called chronic obstructive pulmonary disease (COPD). People with emphysema have their alveoli damaged, which are the air sacs in the lungs. The alveoli are very small and fragile air sacs, located in clusters at the end of the bronchial tubes. We have about three hundred million alveoli in our lungs. They’re all responsible for transporting oxygen into the blood and forcing carbon dioxide out. With the damage emphysema brings to the alveoli, they cannot support the bronchial tubes. The tubes are at high risk of collapsing and can cause a blockage, trapping air inside the lungs. There are also less healthy alveoli in your lungs, meaning less oxygen will be able to make its way to the bloodstream. 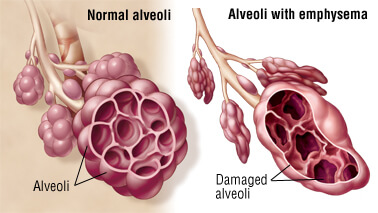 Emphysema is rarely genetic. If you have a history of respiratory illness in your family, you may be more prone to getting it. However, the number one factor of emphysema diagnoses is smoking.  Cigarette smoke not only aggravates the airways, but it also damages the lungs. You’re left with mucus production, swollen airways, and struggling on clearing your airways from cigarette tar. This will all lead to shortness of breath. Other causes of emphysema include air pollutants and respiratory infections. Due to smoking being the main cause of emphysema, it’s one of the most preventable respiratory conditions. However, once you get it, the damage is irreversible. It’s very unlikely that your ability to breathe properly will be fully restored.

You may not even notice you have emphysema because it takes some time to develop. The two common symptoms that appear in the early stages are a long-term cough and shortness of breath. You could only be feeling these symptoms after some physical activities, but as the condition progresses, you may start feeling short of breath when you’re simply just resting.

In the later stages, some symptoms can include: a large amount of mucus, frequent lung infections, morning headaches due to lack of oxygen, severe wheezing, and chest tightness. By this late stage, it’s important you’ve touched base with a doctor so an accurate course of treatment can be provided. Left untreated, emphysema can result in a collapsed lung and even heart problems.

While there is no cure, many options are available for treatment. In early stages of the illness, a doctor will most likely prescribe you antibiotics. Sprays inhaled or taken orally are highly recommended as well because they help relieve the symptoms by relaxing the airways and widening the passages.  In later stages, more intense treatments like steroids, oxygen therapy, and even a lung transplant are considered. It all depends on the condition of the person and what a medical expert feels would be best.

A safe and very reliable option that can be used to treat emphysema is salt therapy. Salt therapy can improve the function of the lungs and relieve emphysema symptoms. Salt particles invisible to the eye will travel down into the lungs and treat the damaged tissue. While this won’t heal it completely, it greatly helps with the symptoms. Salt is anti-inflammatory, antibacterial, antiviral and anti-fungal, helping to fight pathogens, reduce inflammation, and strengthen the immunity. You’ll be able to breathe more easily and have more oxygen in your blood.

Salt therapy can also help in clearing the airways. Salt loosens hard mucus up by attracting water to the lining of the respiratory system. By liquidizing the mucus, it’s easier to cough or blow it out. It’s not a cure, but it will greatly relieve the symptoms. Salt therapy is very easy to do: it can be done at home, using a salt machine, and even treating you during your sleep hours. The key benefit of salt therapy is that it’s completely natural and causes no additional side effects. While steroids and other antibiotics are extremely helpful, you don’t know what side-effects will be triggered and what can happen in the long term. Salt therapy is a completely transparent treatment and you can only benefit from it!